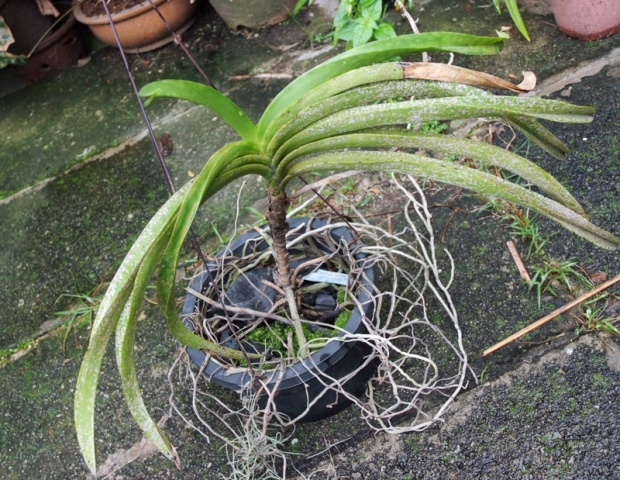 So the other day, my friend showed me the vanda I gave him as a housewarming gift a couple of years ago. It looked terrible. It was sick with scale, had lost many of its lower leaves and the roots could have been a lot better. 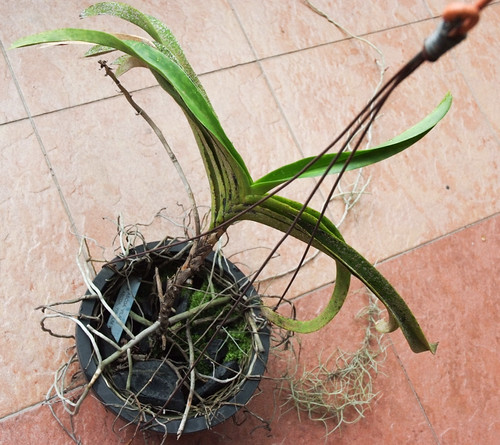 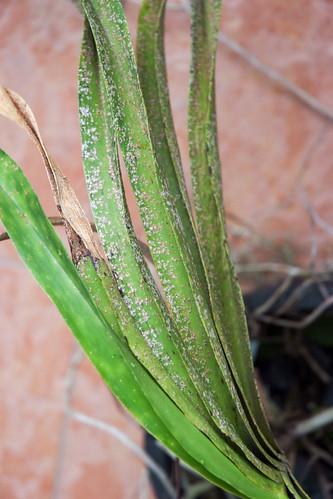 Severe scale infection on the leaves. This was eventually treated with horticultural and neem oil.

One of the first things I did was to pull the vanda orchid out of its pot. The media was obviously very old and the roots showed signs of dessication and decay. 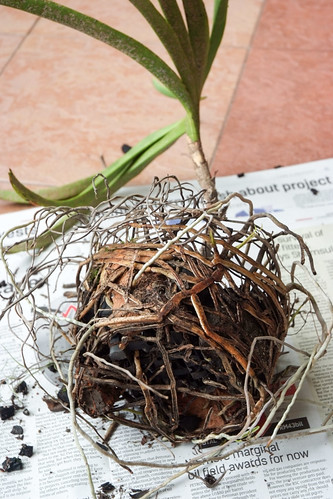 Interestingly, the old plastic basket was found inside the root mass. The nursery must have planted the vanda, basket and all, into the pot and filled it with media. 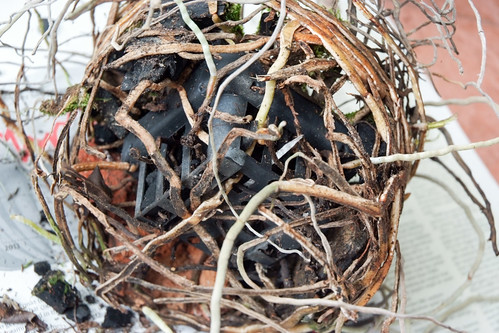 See the old basket in the root-mass?

All of the old media was removed along with the decayed roots. As is often the case with old, sick vandas, the bottom part of the stem with the bad roots had to be cut away (I’m sorry I don’t have a picture), leaving behind the top part with a few living roots. 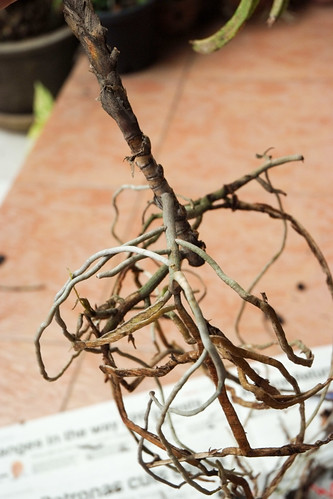 The stem with a few surviving roots. 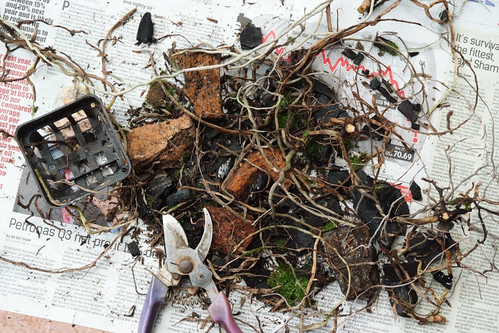 Although it looked like a scraggly mini palm tree, this vanda will survive with some TLC. 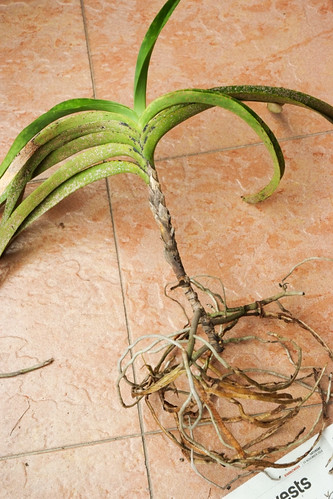 This is the part that will be saved.

Next, I hung it upside down outdoors and let the rain revive it (manual watering of course, if it didn’t rain). This has worked for me in many cases of resurrecting vanda orchids from near-death (see here) 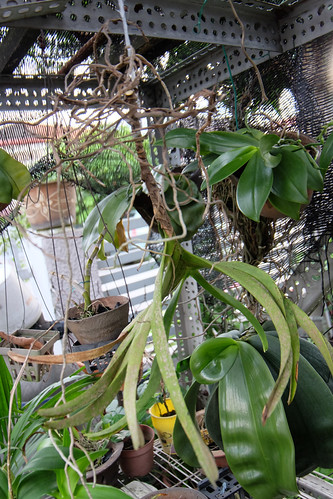 Giving it the upside-down treatment to encourage root growth. Apologies – pic’s a little out of focussed.

After almost a month, the vanda was planted back into its cleaned and scrubbed pot. Yes, I re-use old pots. There’s really no need to throw them away as long as they are cleaned and disinfected. 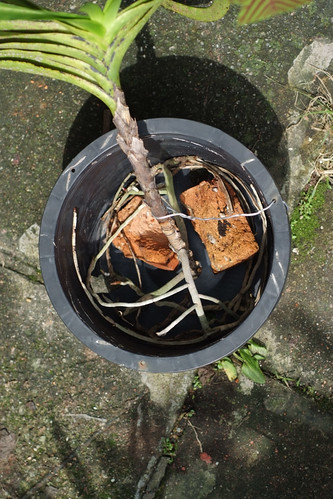 It’s back in its pot with nothing but two pieces of broken brick to give the roots a little something to grip. 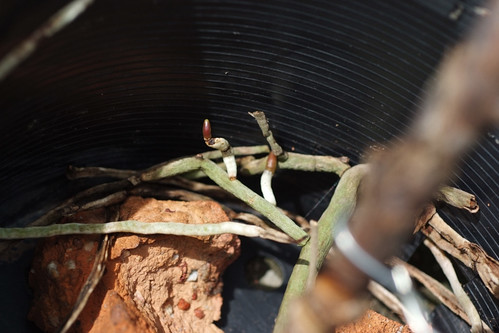 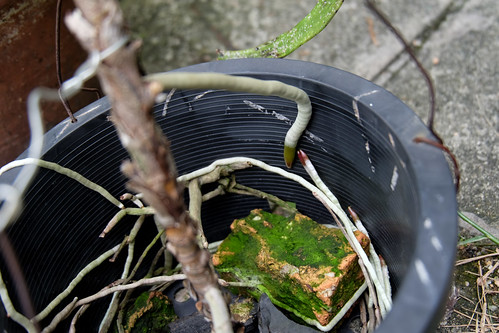 More roots, including a fat, healthy one that emerged from higher up along the stem. 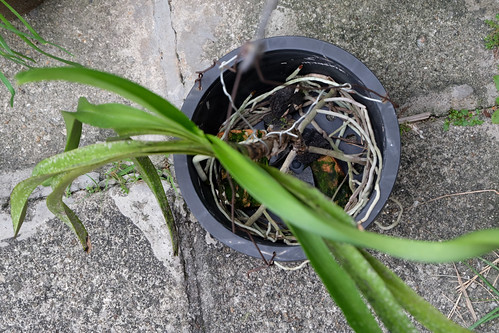 Roots have intertwined inside the pot.

Today, the vanda is a far cry from when it was first brought in.  Nice, plump leaves have grown from its apex and it is thriving from the improved sunlight, daily watering and regular feeding. Although the lower leaves still showed remnants of its previous scale infection, this is no threat – those ‘scars’ can be rubbed off gently. 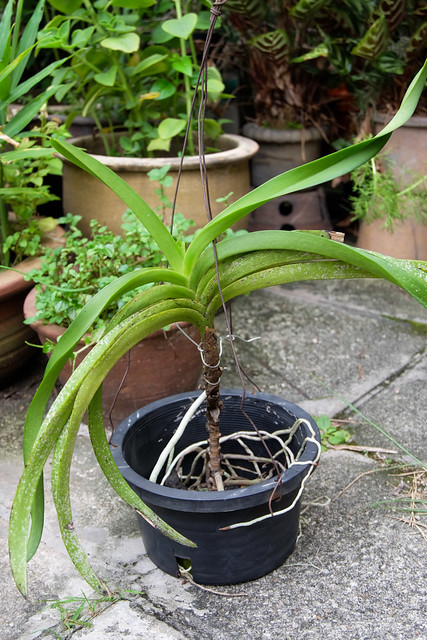